Dr. Juliana Csonger may be in her 80s, but that hasn’t stopped her from hitting the Stoneridge Creek senior living community pool to swim laps every week. It’s one of the many amenities she enjoys at Stoneridge Creek. She’s met several other residents who enjoy the same pastime.

“A lot of active people live here,” Csongor said. “They all keep me feeling young.”

Along with her passion for swimming, Csongor always had a love for sports, competition and, most of all, the Winter Olympics.

Csongor has attended several Olympic trials in the U.S. as a spectator, and like people around the world, she was glued to coverage of the 2018 games in Pyeongchang, South Korea. “You can watch people be excellent and be a part of it for a few moments,” Csonger explained. “You can be a part of it and share the feeling.”

In 2018, Csongor hosted several watch parties inviting other residents and friends to share in many Olympic jaw-dropping moments. They gathered in her apartment and enjoyed snacks and new friendships as well as Olympic excitement.

Csonger grew up an avid ice skater in her native Hungary. Her competitive nature drew her to enjoy figure skating. The sport turned into a family affair, with her son competing, under the guidance of one of the most legendary figure skaters in the world: Scott Hamilton.

“He was a terrific skater,” she commented.

Growing up, Csongor never had any aspirations of an Olympic career – the closest she got was a lesson from an Olympic skating coach after winning a contest.

Csonger’s passion for the Olympics turned her into a collector as well. Inside her Stoneridge Creek apartment in Pleasanton, you’ll find a wide range of collector items, including a signed photo of three-time Olympic champion figure skater and film star, Sonja Henie; photos of her with her hero, Dorothy Hamill; and skates signed by world champions like Kristi Yamaguchi.

“I met Dorothy Hamill at a championship event,” Csongor recalled, doting on her memorabilia, “and that’s her signature with her wonderful hairdo, which I could never do because I have curly hair.”

After retiring as a math professor in Philadelphia, Csongor decided to move to California to be closer to her children. Three years ago, she chose Stoneridge Creek senior living community in the Bay Area. “I love Stoneridge Creek,” she said. “The people here are great, and you just can’t beat the sunny weather.”

Along with the fascinating residents, Csongor said the large pool and fitness classes were a draw for her to make the move. “The pool here takes me back to the time I got to swim in the Olympic pool in Montreal. I love swimming. It brings me so much joy.”

Csongor’s active style and love for anything Olympics was so popular at Stoneridge Creek that it caught the attention of NBC Bay Area. You can watch her complete interview here. 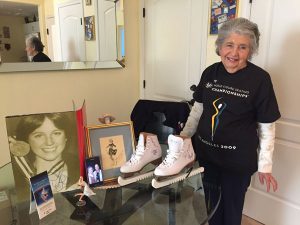