Nearly 400 people crowded into the Stoneridge Creek auditorium on August 11 to watch the world premiere documentary based on the life of resident Milt Feldman. The film, Milt Feldman: A Soldier’s Dream, focuses on Feldman’s capture at the Battle of the Bulge.

Filmmaker Eduardo Montes-Bradley interviewed and shot much of the film inside Feldman’s Stoneridge Creek apartment. Feldman explains his extraordinary story of survival and coming home after the war.

“It was an honor to work on this film with Mr. Feldman,” said Montes-Bradley. “He’s a true patriot. His story of survival during and after the war is remarkable.”

Milt Feldman
The premiere honored not only me, but also the 93 other war veterans who live at Stoneridge Creek,” said Private Milton Feldman. “The community goes above and beyond to make us feel appreciate and I’m glad to call this place my home.”

Milt Feldman was among the troops of the 106th Infantry Division, on board the HMS Queen Elizabeth on his way to Europe. However, on the morning of December 16, Hitler launched a massive offensive in the Western Front in what is now known as The Battle of the Bulge. Private Milton Feldman was captured, then marched and shipped by train on a boxcar to Stalag IV-B, a POW camp deep inside Germany territory.

Following the premiere of the film, Montes-Bradley and Feldman took questions from the audience of Stoneridge Creek residents, team members and Feldman’s family.

Since the premiere, the film has been entered into 18 film festivals across the country, giving millions of people an opportunity to see Milt Feldman’s story. 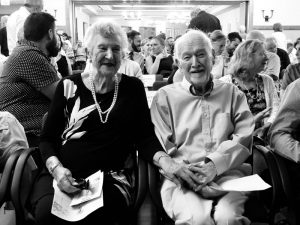 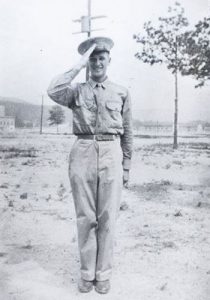