The Eagle Has Landed: Stoneridge Creek Remembers Moment in History

On July 20, 1969, the world was changed as 500 million people watched Neil Armstrong become the first man to step foot on the Moon. The Apollo 11 astronauts and the people behind the scenes became instant heroes. Five people who worked behind the scenes to make the mission possible are now neighbors at Stoneridge Creek.

Residents Richard and Caye Johnson both worked in the quarantine facility at NASA/Johnson Space Center. Stanley Sun did some research for the mission as a graduate student. Han Moi did thermal analysis for the lunar landing module, and Mac Smith helped design the parachute that safely slowed the return of the module back to earth.

Smith was hired as a mechanical engineer for General Electric in 1956. His job in experimental aerodynamics was to gather data and test what happens to capsules that reenter the earth’s atmosphere.

From those experiments, he and his team designed the Apollo 11 parachute that needed to deploy and slow the capsule from supersonic speed down to 30 to 20 mph by the time it landed in the water.

In an interview with the East Bay Times, Smith told the reporter about the significance of this design.

“All this was done with unbelievable precision and knowing that these things had never been done before,” said Smith.

Now, 50 years later, Smith remembers the momentous moment with awe. “It was an adventure of a lifetime,” proclaims Smith. “Just to have played this small part in this huge accomplishment was really neat.”

To celebrate the 50th anniversary of the Apollo 11 program, Stoneridge Creek’s Life Enrichment Director Susan Filice is putting together a display of artifacts, photos, magazine articles and research papers collected by the residents.

Read more about Mac Smith’s involvement in the program in the East Bay Times. 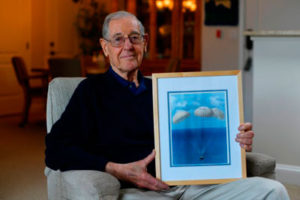