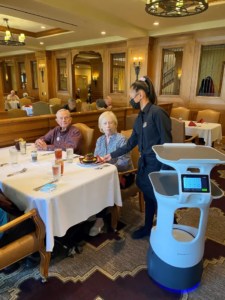 The robots help deliver the food to the tables and take dirty dishes back to the kitchen. (Stoneridge Creek)

You can find the robots drifting around the dining room at Stoneridge Creek senior living community in Pleasanton assisting the staff with their tasks.

“If you would have told me two years ago that in a senior community we would have robots and contactless dining I wouldn’t have believed it,” Zachary Zeigler said.

Yet Zeigler, the Food and Beverage Director, found himself deep into nearly a year’s worth of research looking into ways to adapt his dining program to a pandemic-friendly approach.

He decided to add the Servi robots, a Tesla-inspired technology, to the dining team and also added QR codes on the menus.

The robots essentially have two modes: food runner and busser. When the chef is done preparing the food, Robbie or Stoney come pick it up and take it to a table number the chef punched into the machine. The wait staff serves the food. Then, the robots take the dirty dishes back to the kitchen to be washed.

“They help the waiters save so much time by doing the running around and things they don’t like to do,” Zeigler said.

Helping with the grunt work, the robots allow for the limited wait staff to be able to excel in what they like doing – hospitality. Giving them an additional hand in a sense, the staff has more time to communicate with the residents.

“They’re definitely not meant to replace anybody. We need our servers, they’re an integral part of what we do and their interactions are so important.” Zeigler said.

Residents in senior living facilities are used to their routines. Changing them comes with caution. Luckily, at Stoneridge Creek, the residents were more than ready to adjust.

“Initially, they were nervous, it’s a big change. But once they saw it in place and saw how effective it was, that wow factor disappeared,” Zeigler said.

Gloria Lotten, a resident at Stoneridge Creek, said the community actually embraced the new staff members. The residents even decided to give them names and it stuck. 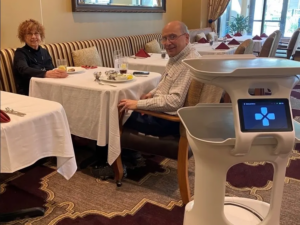 “We hardly expected to see something like this. But everyone has been very receptive,” she said.

The robots came to the facility in October as they were one of the first communities of its kind to add the technology. Communities across the country from Indiana to Florida have since been calling them to ask how it works.

These days, Robbie and Stoney aren’t the talks of the community anymore, they’re just in the background doing their job.

“Now we hardly see them, they’re there and they’re very functional. It’s not a curiosity anymore,” Lotten said.

Instead, Lotten shifts the attention to Zeigler, expressing the community’s appreciation for his commitment to their safety and happiness.

“I am very proud of Zachary because he is on top of things and during COVID he’s done such a fantastic job of keeping us all fed safely. He’s absolutely the best.”